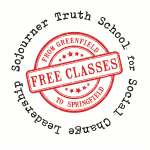 Virtue-signaling.  I remember when I first heard that term—maybe a year ago.  A friend of mine, a fellow anti-racism educator, used the term in our conversation.  When I told her that the term was new to me she explained that virtue-signaling was an action or practice of publicly expressing an opinion intended to demonstrate one’s good character or the moral correctness of one’s position.

Since my friend explained the term virtue-signaling to me, I have read it countless times in books and articles and understand it well now.

I have been thinking about the Truth School and wondering if any of our actions are virtue-signaling.  This has really preoccupied my thinking.  I was particularly stirred up when I was part of a conversation with a white woman and a woman who identifies as Indigenous and Latinx.

During the discussion, which was on dismantling racism, the white woman wondered aloud what she could do to be a more effective, visible, and helpful ally to BIPOC people. She mused about what she had done in the past, and wondered about next steps and how she could be a more powerful, more outspoken, more active ally.  The woman who identifies as Indigenous and Latinx spoke directly to this issue and began by saying, “Well you could start by giving back our land.”

That sentence struck me as so clear, so true, so moving, and so profound.  Give back our land.

Thinking about that deeply for weeks after the conversation, I began to wonder about the land acknowledgment on page 7 of our current catalogue.  There, near the beginning of our catalogue, is the heading “Recognition of Native Lands” and then our four paragraph land acknowledgment.

Maybe I should bring this issue before our Board of Directors. Maybe we should think about adding something that involves action to our land acknowledgment.  Maybe we should tithe or commit to making an annual financial contribution to organizations that are Indigenous led and run.  Maybe we need to do something, not just say something.  Maybe this discussion with the leadership of the Truth School would lead to us earmarking a percentage of our income each year for organizations led and run by BIPOC people.  Maybe we need to think deeply, broadly, and take some action.

Our work is not done.

In the struggle with you, 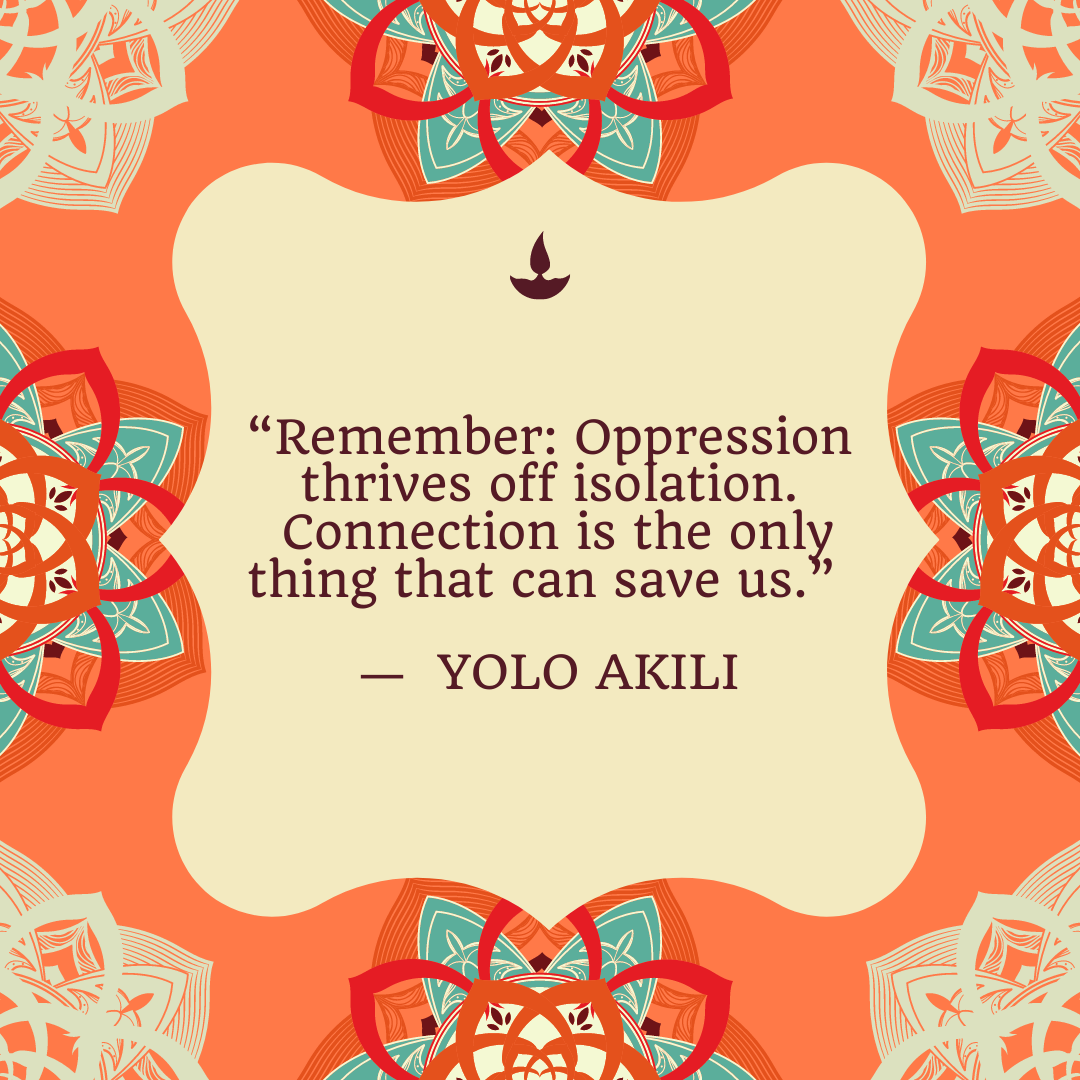 For complete information on all of our class offerings, and to register for a class, visit Truth School or click on the links for specific classes below.

What Participants are Saying… 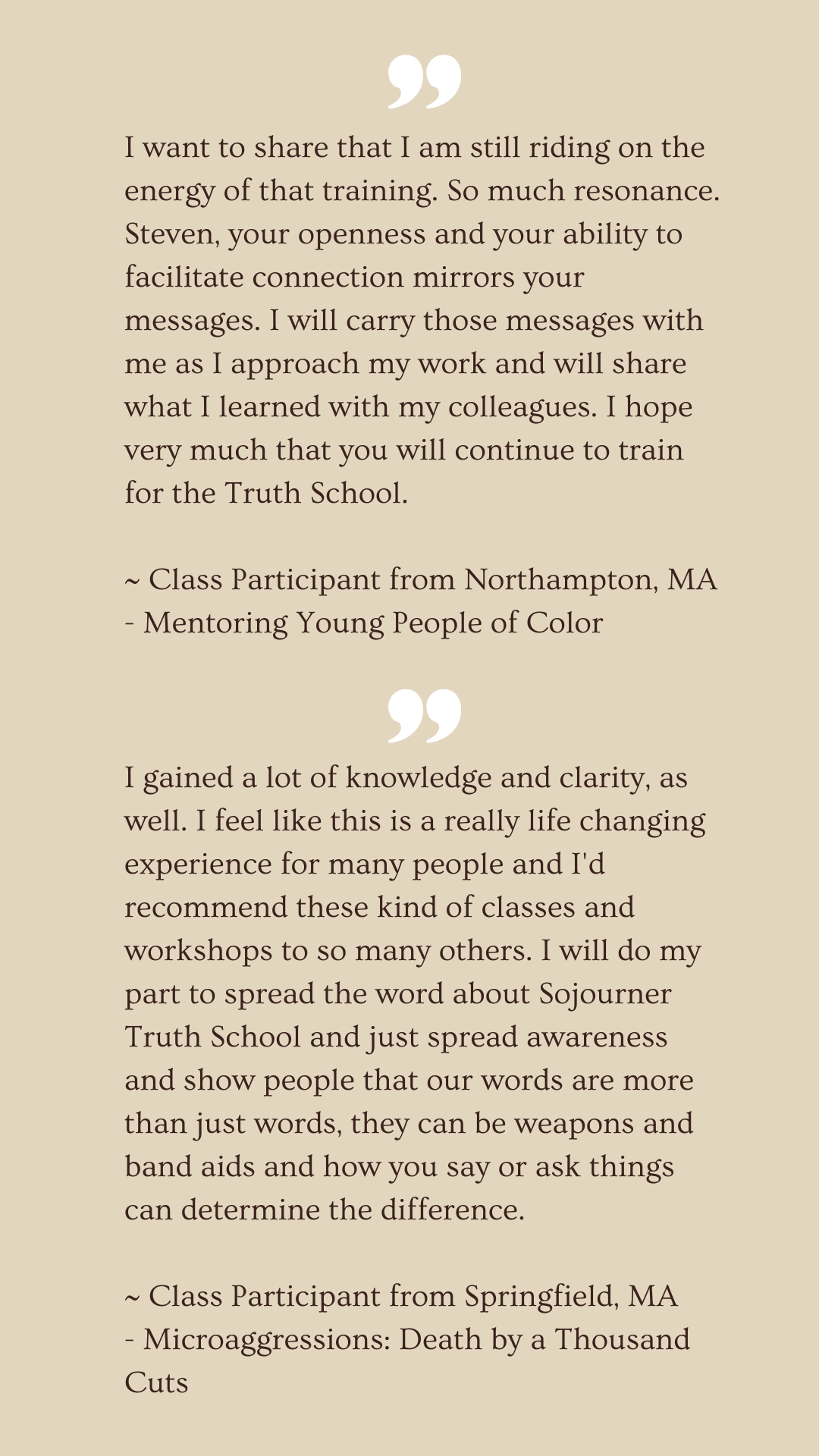 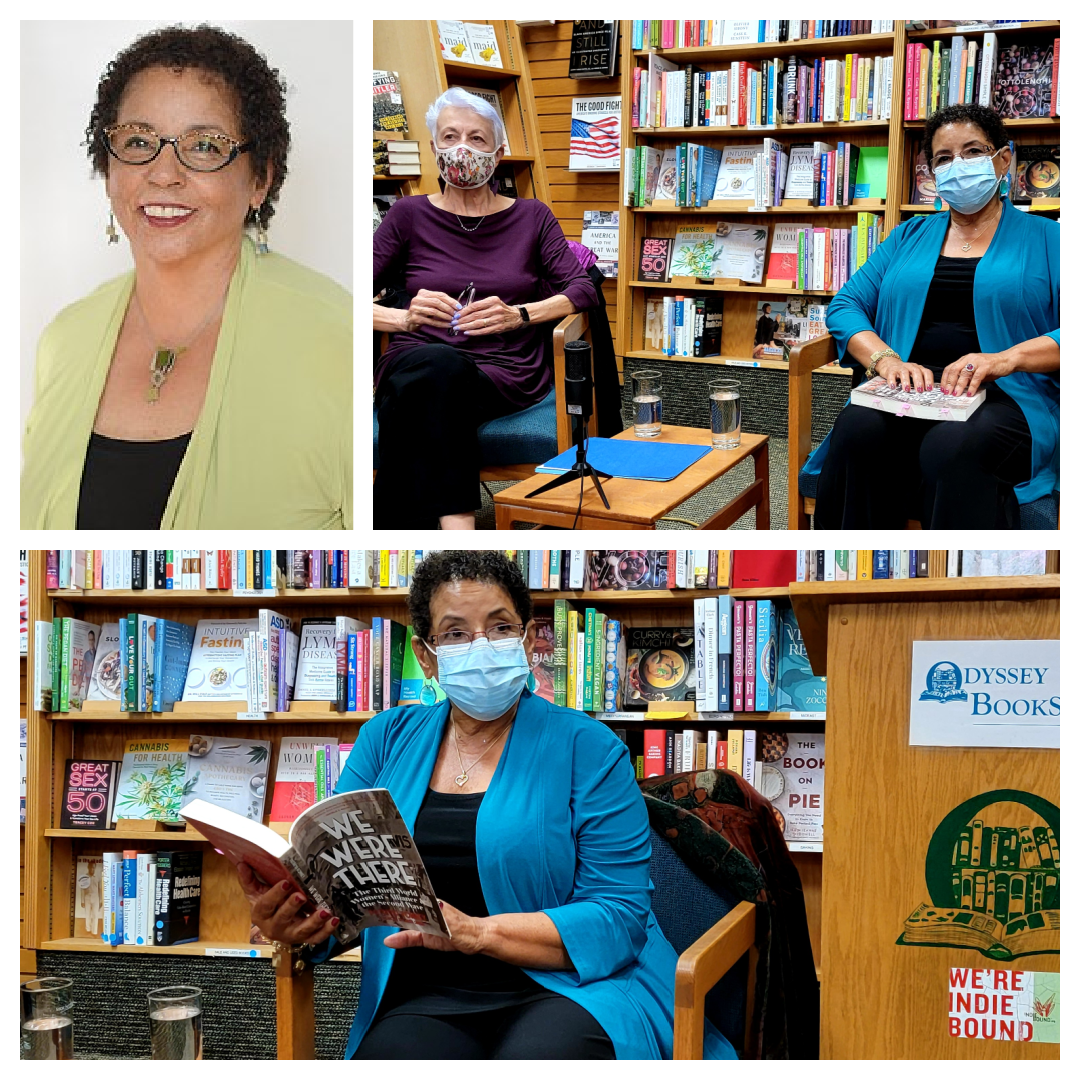 Patricia Romney received her Ph.D. from the City University of New York where she won the Bernard R. Ackerman Award for Outstanding Scholarship in Graduate Psychology. She completed her internship in Consultation and Education at the Yale University School of Medicine and did post-graduate study at The College of Executive Coaching.

For twenty years she taught at the college level, achieving tenure at Hampshire College where she taught for 10 years. Subsequently, she held a 10 year appointment as Visiting Associate Professor of Psychology and Education at Mount Holyoke College. Courses taught included: The Psychology of Oppression, Psychology of Racism, and The Social Psychology of Organizations.

Still an active scholar, Dr. Romney has authored over 20 articles and papers. Her co-edited volume Understanding Power: An Imperative for Human Services was published in 2017 by NASW Press. Her book. We Were There: The Third World Women’s Alliance and the Second Wave was published by Feminist Press in October 2021.

For the past 30 years she has been engaged in dialogue work, large scale diversity initiatives, leadership development and team building, as well as professional coaching of individual faculty and administrators in academia. Currently, Dr. Romney’s work is focused on consulting and coaching for excellence and equity in higher education.

Can you tell us a bit about the Third World Women’s Alliance? I have a sense that younger generations might be unfamiliar with it.

The Third World Women’s Alliance was a Marxist organization of women of color founded in 1970. It was an outgrowth of the Black Women’s Caucus of SNCC (the Student Nonviolent Coordinating Committee). When SNCC began to wain as an organization, the sisters formed a new organization in New York called the Black Women’s Alliance. Recognizing that women in the Third World (both at home and abroad) were targeted by the same oppressive forces, the organization evolved to incorporate Latin women, Asian women, and Middle Eastern women, and eventually developed a chapter in The Bay Area and an affiliated branch in Seattle.

Our purpose was “ to make a meaningful and lasting contribution to the Third World community by working for the elimination of the oppression and exploitation from which we suffer.”

The publisher blurb of my book, We Were There, reads, “From 1970 to 1980, the Third World Women’s Alliance lived the dream of third world feminism. The small bi-coastal organization was one of the earliest groups advocating for what came to be known as intersectional activism, arguing that women of color faced a ‘triple jeopardy’ of race, gender, and class oppression. Rooted in the Black civil rights move­ment, the TWWA pushed the women’s movement to address issues such as sterilization abuse, infant mortality, welfare, and wage exploitation, and challenged third world activist organizations to address sexism in their ranks. The TWWA’s international analysis focused on the effects of US foreign and military policy on the lives of third world people, declaring that US activists had an important role to play in ‘global sisterhood.’ Widely recognized as the era’s pri­mary voice for women of color, this alliance across ethnic and racial identities was unique, then and now. Interweaving oral history, scholarly and archival research, and first-person memoir, We Were There documents how the TWWA shaped and defined second wave feminism. Highlight­ing the essential contributions of women of color to the justice move­ments of the 1970s, this historical resource will inspire activists today and tomorrow, reminding a new generation that solidarity is the only way forward.”

Why did you become involved in the Third World Women’s Alliance?

Like many other young people in my generation, I was angry and fed up! The War in Vietnam was raging on, drafting many of our brothers to fight a war against our Third World brothers and sisters in Vietnam. Heroin was ravaging our communities. Malcolm X had been killed. Martin Luther King had been killed. Fred Hampton was assassinated in his bed. The boycott against Cuba held other sisters and brothers in a stranglehold. African nations were fighting their colonizers. Women were unsafe. Gay people were harassed. We’d had enough!

The Third World Women’s Alliance offered me a place to learn and grow. It provided the opportunity to educate other women of color to be involved in the struggle. It gave us a voice to stand up to the biases we felt from our own brothers, while still remaining in solidarity with them around our common enemies – racism and class oppression. It also offered me a sisterhood, a place to belong, a community where I experienced a sense of my own self-worth, a connection to others, and the power to work together to make change.

What are some of the most rewarding moments you experienced working with other women of color towards collective liberation and equity?

Typesetting our newspaper, Triple Jeopardy. Participating in so many marches where the power of the people was deeply felt. Sitting in meetings nursing our babies together. Participating in the August 26, 1970 Women’s March in New York City, where 50,000 people marched down Fifth Avenue.

Can you tell us about your newly released book, We Were There: The Third World Women’s Alliance and the Second Wave?

Interweaving oral history, scholarly and archival research, and first-person memoir, We Were There documents how the TWWA shaped and defined second wave feminism.

Cherrie Moraga, co-editor of This Bridge Called My Back: Writings by Radical Women of Color, wrote this about the book – “In the 1970s, with the mimeograph as weapon, and in solidarity with international liberation struggles, US women of color turned to one another, across ethnic and racial divides, to recognize their common cause. We Were There is the ‘origin story’ we’ve been waiting for. Those radical sister fore-mothers shaped for themselves an utterly prescient (if not always perfect) politic—one to which the tenets of This Bridge Called My Back, ‘Intersectionality,’ and Transnational Feminism remain beholden. Yes, they were there, as Patricia Romney, living witness and researcher, fervently attests. And we are so grateful that they were.”

I think the most important message is to Be Active Together! Work together, study together, march together, support one another, learn together.

When I look at Alliance sisters now in their 70’s and 80’s, what remains and sustains them is their fight against injustice. We don’t all do it the same way. Some are just as radical as ever, some are more moderate, some are even mainstream. But they all work to empower people of color, many focusing especially on girls and women of color.

We must stay together and we must stay active, working to make the changes that empower us.

And we must stay intersectional. We are not in a one-issue fight. We fought the triple jeopardy of race, class and gender, but there is a web of oppression that extends wide and deep and ensnares too many.

Thank you, Dr. Romney for spending this time with us to talk about your inspiring and powerful movement building work with the Third World Women’s Alliance. This was groundbreaking activism that paved the way for women of color and all who are working towards social and racial justice and our collective liberation, today. Thank you again! We are so grateful.

Columnist Andrea Ayvazian: ‘The Only Sermon’

if we dug a huge grave miles wide, miles deep
and buried every rifle, pistol, knife, bullet, bomb, bayonet
if we jumped upon fleets of tanks and fighter jets
with tool boxes, torches
unwelded them dismantled them turned them into scrap metal

We do one thing. Well.
We teach movement-building skills.
Class after class, week after week, month after month.
We prepare social change leaders to win movement struggles.